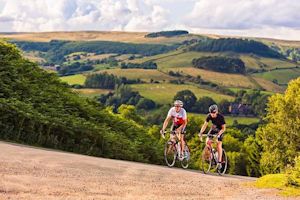 As excitement builds for the 2014 Tour de France which starts in Yorkshire next month, 45 cycling enthusiasts will have the privilege of tackling two stages of the Tour on 7th and 8th June in Yorkshire.

It is a major challenge that will test the very best of cyclists and raise funds for their chosen charity the Steve Prescott Foundation.

Steve Prescott was actively involved in the planning of this event from his hospital bed in Oxford last year. It is hoped that more than £20,000 can be raised over the two days.

Stage one will start outside the Park Plaza Hotel in Leeds 0700. The tour will then move northwards towards Harewood House. The tour will then pass up the Wharfe Valley passing through Otley, Burley in Wharfedale and the home of the famous Cow and Calf Rocks, Ilkley. The race then heads north via the A65 to the market town of Skipton before passing into the spectacular scenery of the Yorkshire Dales National Park. The route then passes northwards through the Dales into Wensleydale and through Hawes then heads south through the cathedral city of Ripon before finishing in at Engage Mutual Headquarters in Harrogate.

The second stage of our challenge will start at Tadcaster and travels into West Yorkshire thorough the towns of Knaresborough, Silsden, Keighley, Haworth, Mytholmroyd, Hebden Bridge, Elland, Huddersfield, Honley and Holmfirth. The tour then climbs over the 'Le Col de Moss', Holme Moss at 524m then descends into the valley of the Woodhead pass. Passing into Derbyshire on the northern tip of the Peak District under the shadow of the Bleaklow plateau it then climbs over the Langsett Moors. Traversing across the moor the route crosses the Ewden valley and heads towards the village of Bradfield. From here the route descends towards the city of Sheffield and its urban sprawl, finishing at Leppings Lane Hillsborough.

Donations to the Steve Prescott Foundation can be made at: