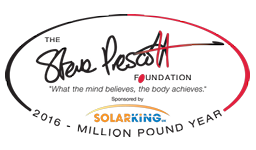 The Steve Prescott Foundation would like to thank GPW Recruitment for their fantastic continued sponsorship of the St Helens 10k. The 6th annual St Helens 10k was run on Mothering Sunday in snowy conditions but the 2000 runners arrived at the finish at Langtree Park in bright sunshine. SPF ambassador Andy Reid set the runners on their way and the Mayor and Mayoress Cllrs Stephen and Lyn Glover were on hand to present the awards. First across the line was Jake Littlehales of Stockport Harriers AC in a time of 32’47’’. First lady to finish was Catherine Howard of Knowsley Harriers in 37’14’’.

Notable runners included SPF trustees Linzi Prescott and Mike Denning, SPF ambassadors Chico Jackson, Chris Joynt, Barrie McDermott and Mike Wainwright, and ex RL players Steve Hall and Andy Coley. Also taking part were Warrington based PGA golf professional Phil Archer and Angela Powers of Sky Sports. Novelty runners included Precky the Panther, the Rochdale Hornet and Darren Henderson in a suit of armour. Many other runners took the opportunity to raise funds for their chosen charities including Willowbrook Hospice. The whole town of St Helens can be very proud of the community spirit shown in support of the event.

There was a huge cheer for former RL player Tony Barrow as he showed immense courage in completing the course while still recovering from an operation for a brain tumour.

A special mention too for Andrew Chapman who travelled from Oxford to take part in the 10k to fund raise for the SPF. Like Steve Prescott, Andrew was diagnosed with pseudomyxoma peritonei (PMP) and has had several operations to eradicate the cancer but is now making a great recovery.

Commemorative T shirts for all participants were provided by Run Geek. Sincere thanks to ZsaZa Florist for providing floral awards for the first three runners in the open categories. Massive thanks to associate sponsors Youth Sports Development, Kiera's Occasions, Vinyline and St Helens Council.

The event would not have been possible without the army of volunteers who donated their time and vocal support for the runners and also to the motorcycle escorts of Merseyside Police. Sincere thanks to the everyone.

Thank you so much for your fantastic support.