Saturday 8th October sees the biggest day in the rugby league calendar when the Theatre of Dreams, Old Trafford hosts the Super League Grand Final in front of over 70k supporters.

A group of walkers from Handepay are walking 18 miles from Haydock to Old Trafford to raise funds for the Steve Prescott Foundation (SPF). The walk will also be used as a training session for some of the SPF Everest  party who set off 8 days later to climb to Nepal Everest Base Camp and then continue to "Kala Pattar" to reach a finishing height of 5645 meters above sea level.

The Steve Prescott Foundation is absolutely delighted to announce that Hotel Football Manchester, which overlooks Old Trafford, will host a reception for the walkers after their arrival at about 1400. 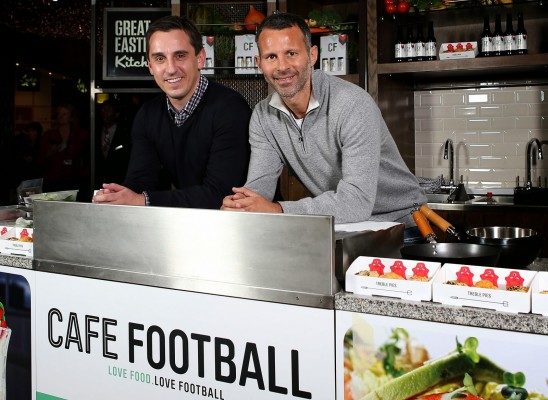 Hotel Football owners Gary and Phil Neville, Ryan Giggs and Nicky Butt are delighted to be providing their support.

Hotel Football will also host a Q & A event which will be a open to all fans at a cost of £2 with all proceeds going to the SPF.  Panelists will include former RL stars Neil Holding, Francis Maloney, Paul Wood and Phil McKenzie and Carlo Napolitano. Compere for the event is Radio City presenter Connor Phillips. A £2 entry fee will per donated to the SPF.

Martin Blondel, General Manager of the SPF says” I’m over the moon with this new partnership with such a high profile company in Manchester. The SPF looks forward to a really exciting journey as we continue to spread the awareness of the SPF. This year we reached the £Million Milestone of donations to our chosen charities and this will enhance our profile even further.”

Hotel Football Food and Beverage Controller Peter Walker is a lifelong St Helens fan and is really keen to support the St Helens based charity which is the legacy of Steve Prescott MBE who passed away in November 2013. Steve played for St Helens, Hull FC, Wakefield Trinity Wildcats and was a Great Britain and Ireland international. Steve was diagnosed with a rare abdominal cancer, pseudomyxoma peritonei (PMP) in 2006 and formed the SPF in 2007 to raise funds for and awareness of the Rugby League Benevolent Fund and the Christie in Manchester.

Steve undertook many physically and mentally exhausting challenges during his illness to raise funds and awareness of the charities close to his heart.  In October 2013 he underwent a pioneering multi visceral transplant of the small bowel, pancreas, duodenum and abdominal wall at the Oxford Transplant Unit and although this procedure eradicated the cancer Steve passed away a few weeks later due to complications of surgery.

Steve Prescott continues to inspire a generation and in 2014 the RFL honoured his contribution to rugby league by naming the most prestigious individual honour in Rugby League for the player who makes the biggest impact on the Super League as the Steve Prescott Man of Steel award.