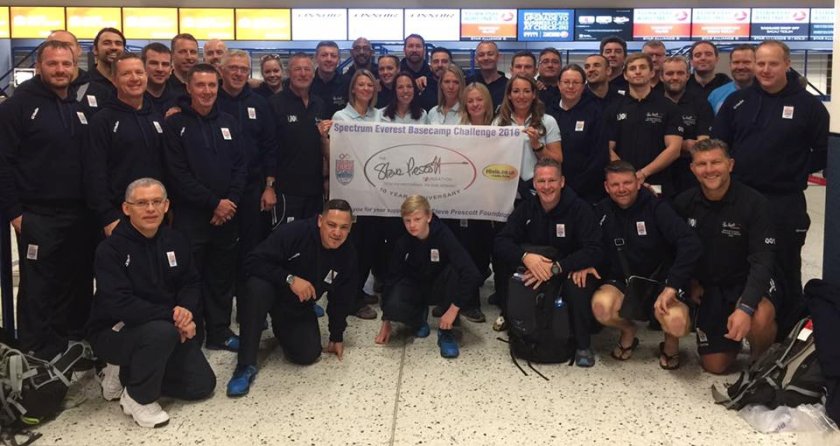 2016 is a milestone year for the Steve Prescott Foundation (SPF) as we have reached a million pounds of donations to our nominated charities the Rugby League Benevolent Fund, The Christie and the SPF Special Causes Fund.

The latest epic challenge inspired by Steve Prescott MBE is the Everest Base Camp Challenge 2016 sponsored by the Manchester based Spectrum Group, a leading supplier of support services in the industrial sector. The challenge follows on from the fantastic success of the Spectrum Kilimanjaro Challenge of 2015 which raised over £150,000 for the SPF and saw the team ratified by the Guinness Book of World Records as taking part in the world’s highest altitude game of rugby league.

A party of climbers led by SPF Trustee Ade Cunliffe sets off on their adventure on 13th October and return to the UK on 28th October. Taking part is SPF Trustee Linzi Prescott, wife of the late Steve Prescott and their 15 year old son Taylor.

The party will arrive in Kathmandu and then face an eleven day trek from Lukla to Nepal Everest Base Camp and then continue to "Kala Pattar" to reach a finishing height of 5645 meters above sea level. The Everest Base Camp trek is one of the most popular trekking routes in the Himalayas and is visited by thousands of trekkers each year. The trek is considered strenuous and will be a test of fitness, stamina and determination for all the climbers in the true spirit of Steve Prescott.

Mike Parr says ‘We will try and raise as much money as possible by climbing the biggest mountain in the world.  It’s going to be challenging but hopefully the money we raise will change people’s lives.’   Each of the climbers agrees to raise a minimum of £4500 for the SPF. Some of the ladies who successfully conquered Kilimanjaro have also signed up for the trek including Jenna Brough, Janet Caldwell and Hayley Russell.

The SPF is a St Helens based charity which is the legacy of Steve Prescott MBE who passed away in November 2013. Steve played for St Helens, Hull FC, Wakefield Trinity Wildcats and was a Great Britain and Ireland international. Steve was diagnosed with a rare abdominal cancer, pseudomyxoma peritonei (PMP) in 2006 and formed the SPF in 2007 to raise funds for and awareness of the Rugby League Benevolent Fund and the Christie in Manchester.

Steve undertook many physically and mentally exhausting challenges during his illness to raise funds and awareness of the charities close to his heart.  In October 2013 he underwent a pioneering multi visceral transplant of the small bowel, pancreas, duodenum and abdominal wall at the Oxford Transplant Unit and although this procedure eradicated the cancer Steve passed away a few weeks later due to complications of surgery.

Steve Prescott continues to inspire a generation and in 2014 the RFL honoured his contribution to rugby league by naming the most prestigious individual honour in Rugby League for the player who makes the biggest impact on the Super League as the Steve Prescott Man of Steel award.

The Everest team have been training for months for the challenge ahead, undertaking hill walks and altitude training. Each member has been involved in innovative ways of fund raising to enable them to reach their individual targets including curry nights, casino nights, touch rugby, golf days and a gala dinner.

Sincere thanks to Spectrum Group for their fantastic support and to all the companies who have sponsored the climbers and to everyone who has made donations to their fund raising pages.  We wish them bon voyage and good luck on their epic adventure.

Look out for daily reports on SPF social media as the Everest team will be sending updates.  #Everest4Precky

Donations can be made to:- http://www.steveprescottfoundation.co.uk/about-the-steve-prescott-foundation/support-4-steve