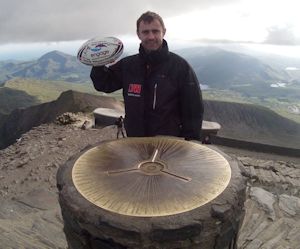 The most prestigious individual honour in Rugby League, the Man of Steel award, is to be named in memory of the sport’s most respected player, Steve Prescott.

From October this year, the player who makes the biggest impact on the First Utility Super League season will receive the Steve Prescott Man of Steel Award.

The RFL’s proposal to rename an honour which has been awarded annually since its inception in 1977 received unanimous support from the 14 First Utility Super League clubs at their Extraordinary General Meeting last week.

Steve Prescott MBE was a former St Helens, Hull, Wakefield, Ireland and England player who raised over £500,000 for charitable causes after being diagnosed with a terminal disease in 2006. His bravery and defiance was an inspiration to millions of people as he completed a series of tough, fund-raising challenges before his death in November last year.

Super League Chief Operating Officer Ralph Rimmer said: “It is absolutely right that the player whose on-field heroics capture the imagination of his peers throughout a First Utility Super League season is presented with an award named in recognition of one of the sport’s true heroes.

“Although he never won the award himself, Steve Prescott really was a man of steel; a truly extraordinary individual who was universally respected by all who knew him and those who watched or read about his exploits.

“Steve was not only a great player and an outstanding ambassador for the sport throughout his illness, he was much more than that. He was an exceptional human being who impacted upon many more lives than the ones he touched in Rugby League and this has been highlighted by the support shown by not only the clubs but also the general public in the naming of the Steve Prescott Man of Steel award.”

Mike Denning, Chairman of the Steve Prescott Foundation said: “The naming of the award for the winner of The Man of a Steel is a fitting tribute to a man who showed so much grit and determination in face of adversity.

“Steve's name will forever live on and be known alongside such Rugby League greats as Lance Todd and Harry Sunderland. We are extremely grateful to Super League and it's clubs who have sanctioned this move and they have recognised how Steve has promoted this great game through his efforts, and we on behalf of his foundation will continue to do so.”

Steve's wife Linzi, added: “The news that the Super League clubs have unanimously voted in naming the award for the Man of Steel winner after Stephen is overwhelming. His achievements during his illness always amazed me and the fact that his name will always be linked to this prestigious award will for ever be a reminder of what a special husband, dad and person he was.

“Stephen would be delighted, honoured and a little embarrassed by this announcement but we are all extremely proud. A massive thank you to all who have supported the renaming of this award and in particular those fans who petitioned to the Rugby Football League showing their respect for Stephen. Thank you.”

The Steve Prescott Foundation has donated £526,000 to The Christies Cancer Hospital and RFL Benevolent Fund. At the start of the year the charity appointed 16 ambassadors from the world of sport to continue Steve's legacy.

The identity of the Steve Prescott Man of Steel will be decided by a poll of every First Utility Super League player at the end of the season: the players’ votes are then considered by a specially convened selection panel featuring a previous Man of Steel winner, two representatives of the players’ association League 13, a member of the broadcast media and a representative of the print media.

The 2014 Steve Prescott Man of Steel will be crowned at the First Utility Super League Man of Steel dinner at Lancashire County Cricket Club on Wednesday October 8.

The remarkable life and career of Steve Prescott will be celebrated in a ‘Super League Superstars’ special on Sky Sports 1 tomorrow (Thursday March 6) at 7.00pm.​​