They will attempt as a team to be the first people to walk THE FULL island of Rhodes in only 48 hours.

Ben and Gaynor will fly to Rhodes from Leeds Bradford International Airport arriving at 11pm.

Less than 12 hours after landing in Rhodes (already loosing two hours with the time difference) they will go to Mandraki for the start line.

Ben and Gaynor will start the Extreme Challenge walk at midday and will walk the full West coast of Rhodes down to Prasonisi – a total of 80 miles. They have never walked any part of the West Coast and this will be completely new to them. The West coast includes many areas of mountain roads and they will face many new dangers along the way especially during the night section. They aim to reach Prasonisi the following day at midday on Monday 6th August 2018. 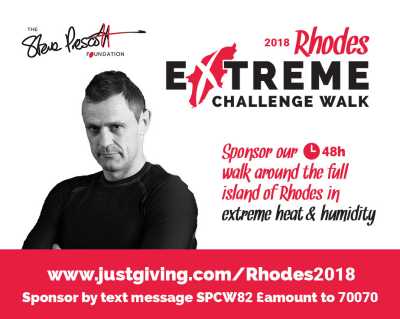 Ben and Gaynor aim to arrive at Prasonisi at midday or before. This will allow them to get some sleep in the afternoon and then preparations will start for midnight for Ben to take on the full East Coast.

Ben and Gaynor decided that just Ben will walk the full East coast and Gaynor will be a part of the support team. The reasoning behind this is we want to break the current record of 22.5 hours that we set last August. This decision has also been made so Gaynor can fully support Ben at all times for his safety and to help provide Ben with extra motivation when the going gets tough - by speaking about Steve Prescott at all times !

Ben will aim to arrive at Mandraki in the evening of Tuesday 7th August 2018.

This is going to be a huge test after walking the 80 miles only hours before so and they fully believe that having Ben do the East Coast walk and with Gaynor’s motivation and support as part of the support team new history and records can be achieved . The east coast will be a total of 70 miles and Ben is looking to set the record of 20 hours or less. Ben will set off at midnight walking all through the night and into a full day of walking on the Tuesday 7th 2018 to the destination of Mandraki in the hot and humid Rhodes weather.

If everything can be achieved they will create history as the first people to walk the full West coast of Rhodes within 24 hours, Ben will be the first person to walk the full island in 48 hours walking time and is looking to break the current one-day record of 22.5 hours for the full east coast that they set last August.

This is something Ben and Gayor say they must do to continue Steve Prescott's memory and legacy - and to raise much needed funds for others who need help.

The only thing they want from this personally is the challenge itself.

What they do is totally unique and not one other person will ever do what they do !

Once again through the extreme challenge walk Ben and Gaynor will promote the island beautiful of Rhodes. This is their way of helping the local people of Rhodes by getting more people to hopefully visit the beautiful island.

Please watch the following video with Steve Prescott’s story so you can understand why Ben and Gaynor do what we do.

In 2015 Ben Moorhouse and Gaynor Thompson walked the full east coast of Rhodes in 3 days in August in a time and style not many people could believe.

In August 2016 they returned to Rhodes and on August 1-2 and walked the full east coast in 2 days during the hottest time of the year rewriting history in the process.

On August 7th 2017 they created history walking the full east coast of Rhodes in just ONE day - a total of 70 miles or 113klm in extreme heat and humidity.

Ben and Gaynor announced their 2018 Extreme Challenge Walk on December 16th 2017 and they had the support of some incredible special guest speakers.

Ben and Gaynor thank all of their 2018 Official sponsors and everybody who will support them in 2018.

You can sponsor Ben and Gaynor via their Justgiving page or by text message.