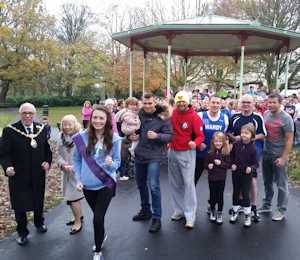 The St Helens 10km is pleased to confirm that it has been selected as the first race in this year’s Merseyside Grand Prix.

Now in its 3rd year, the Grand Prix awards points for registered running clubs 6 best scores for teams, and 5 best scores for Individuals and Vets across 10 designated races. The events cover 5km to marathon length in distance, from March to September. St Helens 10km will be the first event of the season.

Now in its 5th year, the increasingly popular 10km starts and finishes at Langtree Park, home of St Helens Rugby league Football Club on Sunday 8th March. The course takes participants over the Steve Prescott bridge, through the centre of St Helens and then up the infamous ‘North road’ hill, before circulating round the refurbished Victoria park. Runners then enter the park picking up part of the parkrun route, before exiting and returning back to the stadium. Whilst the route may be described as undulating, runners can achieve fast times with last year’s winner Jake Littlehales from Stockport Harriers, completing the course in 32:30.

Mike Denning, Chairman of The Steve Prescott Foundation that manages the event, says: "We are elated that we can now say that the course this year will be the route for the foreseeable future! We are honoured to be the first event for the prestigious Merseyside Grand Prix. So far we have 1500 athletes signed up and are hopeful to reach capacity of 2000 before February 22nd deadline".

Entry for the UKA licenced race is done online and the closing date is 22nd February.