A crack 8 man team representing the Steve Prescott Foundation (SPF) will tackle a cycling endurance race called the Race Across Europe (RACE) starting on the 3rd July 2018 from Boulogne Sur Mer and finishing in Gibraltar. The route incorporates the toughest terrain Europe can offer, covering a total of 3000 miles. The challenge is to cycle nonstop, 24 hours a day, to set a 6 day record for the event. The aim for the team is to raise a massive £60k for the SPF.

The specially selected SPF team will be announced on a daily basis from Wednesday 7th February with one team member announced daily. The SPF eight man team will be split into two teams of four and will operate with riders rotating by cycling in short intervals. This is only possible with a support team of 18 people making sure the cyclists are concentrating on riding their bike at the optimum speed. The 18 man crew will be led by Paul Ramsay who has skippered 3 successful Race Across America cycle rides. 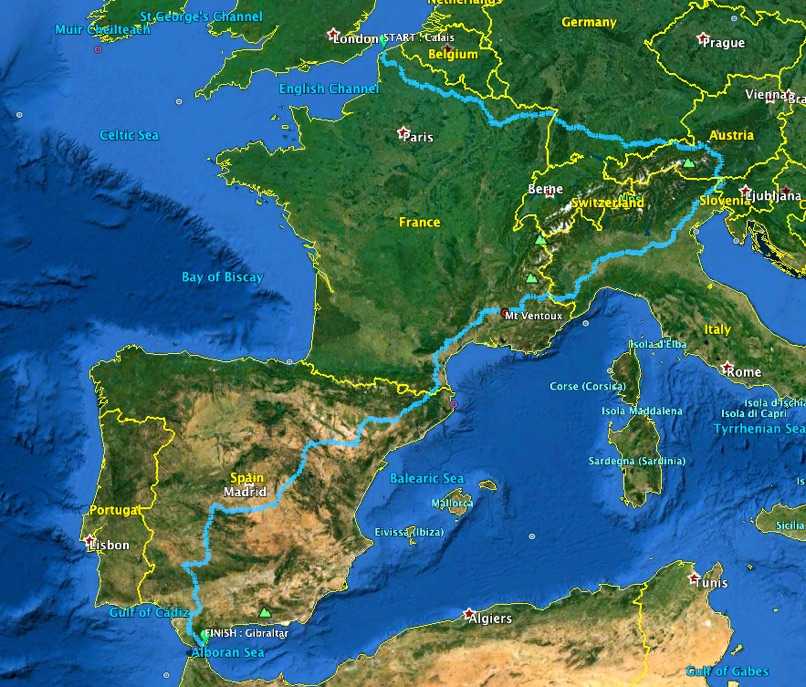 We may have a corporate place available in the team for one person who must meet the following criteria:-

If you meet the above criteria and are interested in joining the SPF Team please email info@steveprescottfoundation.co.uk or contact Martin on 07971792859

RACE is a once-in-a-lifetime cycling event featuring the very best of riding in Europe for supported teams and unsupported solos and pairs. This event requires exceptional teamwork, stamina, energy, strategy and humour to succeed. Don’t let ‘race’ put you off though. The support crew are critical to the success of the cyclists and in many ways have the harder challenge and gain just as much by way of a major life achievement as anyone on a bike. It is truly a team event for everyone!

The RACE 2018 starts in Boulogne sur Mer, tracks north through the French Ardennes and crosses the Rhine into Germany. From here it climbs briefly into the Black Forest and onto a high plain that traverses east across Germany into Austria before heading south into Italy then immediately east into Slovenia to cross the Vrsic Pass. The route then descends back into Italy and heads due west, crossing the Colle dell’Agnello back into France. We ride through Provence, climb over Mont Ventoux, then head south into the Languedoc Roussillon to cross the eastern Pyrenees into Spain. Spain provides consistently good road cycling all the way to the orange groves of Andalucia and the final rolling roads to Tarifa, with views of the Atlantic Ocean, Mediterranean Sea and mountainous north African coastline.